Psalm 128:6 – And may you see your grandchildren. Peace be on Israel!

This is our 11-year-old grandson, Waylan. He loves any animal under the sun. Literally. His happiest days are when he is with animals.

This week, he took a steer to the county fair. Thursday was show day. Unfortunately, his steer was a pill and did not cooperate. Maybe a different environment was too much for him. Before it was show time, Waylan made the difficult decision to leave the steer in the barn and not show him. Waylan had helped show another exhibitor’s calf earlier in the day. And another exhibitor let him how an animal for showmanship, which is when the youth is judged on how they handle the animal. He did very good in this class.

Right after Waylan’s showmanship class, the M.C. announced that four special awards would be given this year. For his age bracket, Waylan was selected to receive this award. Even though he was not able to show his steer, Waylan still participated and loved being a part of the fair.

It’s disappointing when something does not turn out as anticipated. I think Waylan’s Dad (Hubby Rick’s son, Darran), was more disappointed than Waylan that the steer did not show. While showing in showmanship, Waylan had a big smile on his face and loved doing what he loves so much: being with animals.

Waylan worked hard this week at the fair. He pitched in and helped with all the animals various club members had at the fair. An adult shared with me that Waylan was one of the hardest-working boys he observed at the fair. To me, this is far more important than the color of ribbon he received or whether or not the steer eventually made it into the show ring.

It is easy to loose sight of what is really most important in our lives. Maybe Waylan taught us adults a lesson today. Have fun doing what you love and forget about the rest. 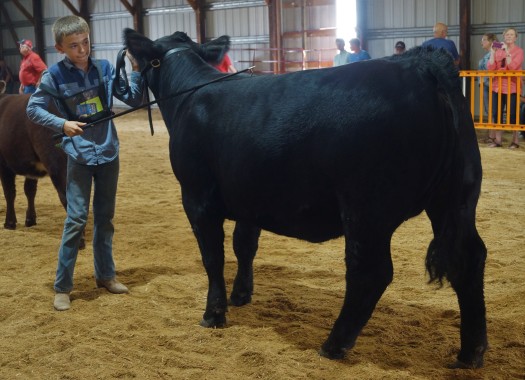 For this, I am grateful.

Almighty God – when we are disappointed, we often seek someone to blame or accept responsibility for the problem. Maybe, the lesson is something other than this. May you always steer us towards the little lesson we can learn from any challenging situation. Amen.

If you have enjoyed this blog, please pass it along to someone else who will also enjoy it.